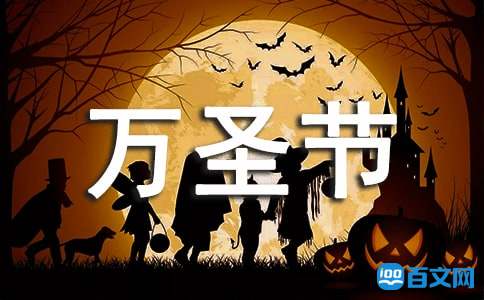 Halloween is a holiday celebrated on October 31. By tradition, Halloween begins after sunset. Long ago, people believed that witches gathered together and ghosts roamed the world on Halloween. Today, most people no longer believe in ghosts and witches. But these supernatural beings are still a part of Halloween.

The colors black and orange are also a part of Halloween. Black is a symbol for night and orange is the color of pumpkins. A jack-o’-lantern is a hollowed-out pumpkin with a face carved on one side. Candles are usually placed inside, giving the face a spooky glow.

One of the oldest Halloween traditions comes from the ancient Celts, who lived in western and central Europe long ago. The Celts celebrated a holiday

y called Sa amhain on October 31. After sunset that day, people believed that spirits of the dead would rise and walk the earth. The Celts made offerings of food and drink to keep the spirits away.

Beginning about 2,000 years ago, the Roman Empire conquered many Celtic peoples. But Celtic traditions, including Samhain, remained strong in areas such as Ireland and Scotland, even after the Roman conquest.

The Roman Catholic Church tried to replace Samhain in 835 with All Saints’ Day, a day to honor saints of the Church. The eve of All Saints’ Day is October 31. It is called Allhallows or Hallowmas by the Church.

While there are many versions of the origins and old customs of Halloween, some remain consistent by all accounts. Different cultures view Halloween somewhat differently but traditional Halloween practices remain the same。

Halloween culture can be traced back to the Druids, a Celtic culture in Ireland, Britain and Northern Europe. Roots lay in the feast of Samhain, which was annually on October 31st to honor the dead。

Samhain signifies "summers end" or November. Samhain was a harvest festival with huge sacred bonfires, marking the end of the Celtic year and beginning of a new one. Many of the practices involved in this celebration were fed on superstition。

The Celts believed the souls of the dead roamed the streets and villages at night. Since not all spirits were thought to be friendly, gifts and treats were left out to pacify the evil and ensure next years crops would be plentiful. This custom evolved into trick-or-treating。

Dressing in masks and costumes is a popular Halloween activity. Costumes can be traditional and scary, such as a witch’s pointy hat and black gown. Costumes may also have a modern flavor. Many children dress up as movie characters or a favorite superhero.

But Halloween is not just for children. Many adults enjoy showing off their costumes at Halloween parties!

Once in costume, children go from house to house saying “Trick or treat!” In the past, children might play a “trick” on people who did not give treats. They might pelt houses with eggs or old tomatoes, or play other pranks. Today, children’s cries of “Trick or treat!” are usually rewarded with candy.